A proposed law would see Israel’s strip clubs shut down. Faced with the prospect of losing their jobs, Tel Aviv’s strippers have had enough. This Thursday (3/5), the women behind Israel’s (in)famous sex workers’ Facebook page, When She Works, will be leading the country’s strippers’ protest, fighting for their their right to decide what to do with their own bodies.

DIY Tel Aviv caught up with Eden, one of the women behind both the page and the planned protest. Eden, a cheerful 29 year old graduate (“currently considering my MA options”) has been working in the industry for the last three years and has no plans of stopping any time soon. She describes herself as someone enjoys travel, music, dancing and hanging out at the beach, and loves nature, animals and good people – a perfectly normal Israeli girl.

DIYTLV: What’s this proposed law? Why are you protesting?

Eden: This law would make stripping the same as prostitution, which would mean club owners would become criminals, clubs would be illegal, and we’d be out of a job.

This proposed law is definitely the trigger, because our jobs are now seriously under threat, but we’ve been wanting to speak out for a while. For years we’ve been suffering from social stigma, ignorance and prejudice, repeated attempts to shut down strip clubs, police raids, shutting down the “rooms”  without asking actual strippers first, and more. We’ve been frustrated and keen to make our voices heard for quite some time. We’re grown up women who can make our own choices and don’t need you to force your own ideologies on us. Let us dance in peace!

People who oppose strip clubs say that there is actual prostitution in strip clubs. Do you ever feel pressured to do more than just strip?

There are no rooms at the club I work at anymore, so even if I specifically wanted to do anything more, I couldn’t. But even before the private rooms were shut down, I never slept with customers and nobody else had a say in what I was doing or who I was doing it with. As a stripper, you’re pretty much your own boss. Obviously, clients were always trying to convince me to do more and making offers (some more tempting than others). It’s a job where you have to be clear about your own boundaries and where (and how) to draw the line. While working, you also learn about what’s right for you and what isn’t and behave accordingly. The bosses are never involved, at least not in my experience. If you have a problem resisting social pressure or setting boundaries, then this is probably not the job for you.

People usually talk about stripping and prostitution as things women end up in not out of choice but out of desperation – because they are on drugs, are unable to get any other job or have been sexually abused in the past. How does that compare to your personal experience and what you’ve seen around you while working in the industry?

I think this is a patronising, belittling view. It presents us as weak, stupid and mentally unstable. What I see around me is exactly the opposite: strong, intelligent women with enough of a backbone to flaunt society’s conventions. Of course, I don’t think we’re the only ones.  I know that there are women in this industry who are there for the wrong reasons.  I am all for helping anyone who wants to leave by providing whatever they need, whether it’s financial help, mental health support or help with increasing employment options.

What I find particularly problematic about sex work statistics, though, is that the women who end up in these reports are usually the ones from shelters and rehabilitation centres.  It’s like looking at domestic abuse shelters and using only those to learn about what relationships between men and women look like.

Do you think closing down the strip clubs would help those women who are desperate to get out?

Closing down the clubs would hurt all of us, whether or not we like the job. And actually, those with fewer options would probably end up as prostitutes in far worse, less safe conditions. The client incrimination law and the proposed law to define stripping as prostitution are basically taking options away from women and pushing them towards worse options. If we had a better option, wouldn’t we take it? If I choose to work as a stripper then that’s obviously what I believe is the the best available option for me right now.

Instead of making laws over our heads to save us from ourselves, try talking to the women who are actually working right now. It’s not that hard to go into a strip club and speak to the strippers themselves, listen to them and act accordingly. I don’t know a single stripper who’d be happy to see her workplace shut down. Some women support whole families with this work. Closing down the clubs would seriously hurt them and their families.

Another common complaint I’ve heard is that strip clubs cause problems for the neighbourhoods they are in because they encourage the objectification of women. What do you have to say about that?

I have to say I’ve never come across this argument. I think the objectification of women comes from far deeper attitudes in our society, attitudes about sexuality and women who allow themselves to wear what they want and do what they want.  To say a stripper is responsible for sexual harassment / objectification is ridiculous. It’s like saying women invite rape by wearing revealing clothing. It’s really sad when women who call themselves feminists say these things. Why not lock up any woman who wears revealing clothing and keep them all at home to stop street harassment?

This debate is dominated by men calling for legalisation on one hand and feminists on the other, wanting to shut everything down.  If you strippers are so happy with your job, why don’t you speak out more?

It’s really sad. I myself am a proud feminist and so are all the women I know in the industry. I find it really troubling that Israel’s dominant feminist voices are against us.  I see it as the absolute opposite of feminism.

Social stigma is definitely the worst part of this job. I personally was kicked out of the flat I was living in when I said I wanted to become a stripper. There are mothers who are afraid their children would suffer from this stigma, too. We don’t want our parents and families to get hurt, or to be turned away from other work if we want to get another job later on.  All this apart from not wanting to be branded as stupid, or as victims, drug addicts, alcoholics, mentally ill, etc.  The social stigma for sex workers is so much worse than, say, being from the LGBT community. It completely silences us, which is why we opened When She Works. We are still mostly anonymous there, but at least it gives us a platform to express ourselves. I hope the stigma will eventually go away and both men and women will dare speak out.

By the way, nowadays the stigma is so strong, that even clients are afraid of speaking out. I think that’s unfair and sad, because they’ve paid for a service I freely chose to provide and have done nothing wrong. But somehow both the workers and the clients are afraid of speaking out. The only people speaking in our name are women who’ve probably never even been to a strip club.

Your event is happening a day before Tel Aviv’s SlutWalk. Is this on purpose? How Do you feel about the SlutWalk itself?

Actually, we wanted to hold this protest a couple of weeks ago, but for various reasons it didn’t work out, so it ended up on this date. I actually think it’s good timing, because it highlights the hypocrisy of today’s dominant feminist ideology. As I said, I’m a feminist myself and fully support the SlutWalk. I marched myself a couple of times. Somehow, though, in Israel most of the organisers are opposed to our Facebook page and want to silence us. Not all of them, I hasten to add, some do support us. But I think most of them don’t. It’s funny that on one hand they understand that a woman should have the right to wear whatever she wants and it doesn’t justify rape, but on the other hand they want to shut down my workplace because wearing revealing clothing is all about the objectification of women.

Israel’s stripper protest is happening this Thursday (3/5) at 18:00 in Tel Aviv. Contact the oganisers via the When She Works Facebook page if you would like to come and show your support. The location is being kept secret to minimise counter-protests. 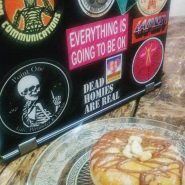 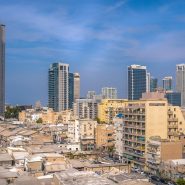 FAQ
Get the Guide!